By: Brian A. Shactman, Jessica Golden

Run for miles. Jump over fire. Crawl under barbed wire. Get pummeled in what's called a Gladiator Arena.

Welcome to the Spartan Race and the world of obstacle racing, one of the fastest growing sports — and businesses — in the United States. 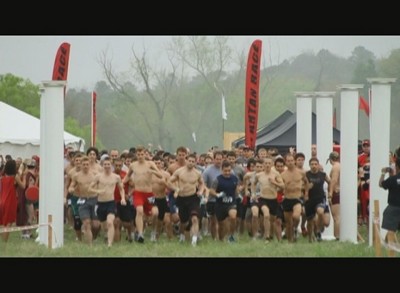 Obstacle racing boasted about 50,000 participants in 2010. Last year, it was up to 1.5 million worldwide, with Spartan accounting for about 350,000 of those racers.

What exactly is it? Good question.

According to the race promotions, it's basically Navy Seal training intersecting with American gladiator...in a true test to fitness and will power. What that translates into is a course — ranging from five-kilometer length to a marathon — that is littered with obstacles, ranging from electric fences to mud slides.

"We're estimating more than one million people will compete in events this year, maybe two million."

With race fees sometimes more than $100, plus parking fees and merchandise, De Sena noted it easily could be considered a $200 million business. "If you look at growth rates, if it continues on this path, it will eclipse a lot of sports."

Another question: Why would people pay a premium to punish themselves?

Jonathan Ages, CEO of Blood Sweat and Cheers, a website that helps people find active and fun activities explained these races generate the most traffic on his site.

"Grown ups want to have fun again," said Ages, of the growing phenomenon. "Just because we are adults doesn't mean we can't have recess."

For De Sena though, it's more than that. He's an accomplished extreme athlete himself and started what's called the "Death Race" in Pittsfield, Vt., in 2005. Put it this way, the 2013 race is 50 miles long, full of unknown obstacles and challenges. Less than a quarter of entrants will finish.

From that race came the Spartan Race because De Sena wanted to bring the experience to a wider audience.

"I think it feels good," said De Sena, describing why he thinks the races have hit a nerve among athletes. "I think that's the big appeal for people because they can get out there and drive themselves around the track they way they would with a Ferrari.

"This feels really good for the human body."

De Sena said he believes in the business, but he also believes in the legitimacy of the sport. He's investing millions to formalize it and eventually make a bid at it being included in the Olympics.

And the broader sports world has taken notice. Reebok, owned by Adidas, recently made a huge commitment to the sport. Already invested in the Cross Fit phenomenon, which is probably the Spartan equivalent in the gym, Reebok is designing a brand of clothing and sneakers specifically for obstacle racing.

"We are spending a lot of time and money focused on making this a true sport," De Sena said.

De Sena also wants to set the Spartan Race apart from its competition, races like the "Tough Mudder" and "Warrior Dash," which also have seen immense growth. He notes his race has a major corporate sponsor, a standard set of rules and Olympic aspirations.

"Everyone else in the crowd [is] really focused on having a beer at the end," said De Sena, referencing his sense that the other races focus on the social side of the experience. "A social gathering, that's good...Nightclubs do really well [too], but [Spartan] is the Olympics."

By the way, you can still have a beer at the end of a Spartan Race, too, but after the first one, you'll have to buy it.